Diving with a stick 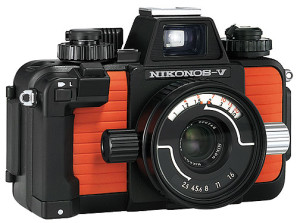 Do you go diving with a stick? Personally I don’t as I really do not see the point unless I have a camera and intend to use the stick as a measuring device. This is originally what ‘dive sticks’ were designed for, a tool for underwater photographers to gauge the distance of their topic. But then this was back in the old days of film, not digital cameras; when maybe 1 out of every 20 divers had a camera; instead of now a days when 1 out of every 20 divers does not have a digital camera; that let’s face it they really do not know how to use. In fact they should probably leave it at home and practice on their buoyancy skills instead.

Oh hang on that’s where the stick comes in!! 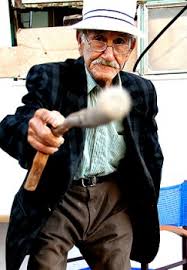 What first started off as a probe for experienced divers with cameras has now become a crutch for less experienced divers with and without cameras! We see it all the time when diving; the dangling stick that as soon as a diver wishes to stop and look at something is taken in hand and unceremoniously jammed into the nearest object whether it be sand, rock, hard coral or soft coral, all so the diver can stop for a few seconds and look at the pretty nemo fish!!

Not to go on a rant here but honestly why do you need the stick to stop and look at something! I get it if you are in strong currents then maybe having a stick can be useful especially if you are not so experienced. But knowing where it is acceptable to place the stick in these circumstances is another issue. During a relatively gentle dive, there really is no need for anyone to need a stick. Try using your buoyancy instead – after all this really is the only skill a diver needs for recreational diving – so by using a stick to assist these divers are basically saying they cannot be bothered to learn the one skill that makes diving what it is.

Breathe in breath out a good mantra for above and below the ocean. But when you are trying to stop and look at something this is when your breathing itself becomes a skill, after all this is buoyancy! If you do not understand this simple premise then I suggest you contact your local dive shop and ask to do the Peak Performance Buoyancy Specialty – I can guarantee that course does not include a stick! 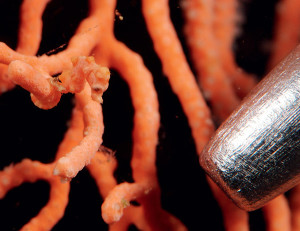 Now let’s talk a little about the other stick wielding atrocity we witness underwater- moving marine life! Just because it is a metal stick does not mean it will not hurt the teeny tiny pygmy sea horse you are now essentially ramming with a giant metal probe so he looks at you while you blind him with your camera flashes!! There is a reason seahorses and other critters tend turn their backs on divers – they do not like us!! We are big noisy, cumbersome, hurtful and usually blind everything we see. If I were a sea horse I would also turn my back and I would be rather annoyed if someone then started ramming with a giant metal probe!

Some divers tell me they like their sticks as it is a good signaling device, I understand this but does it really need to be two feet long! I use my thumb ring as a signaling device underwater and it makes just as much noise as a giant metal stick!

Next time you are out diving, just try leaving your stick back at the shop and spend a little time concentrating on your buoyancy skills – it’s not really that difficult – and the Yoda like feeling you get from being totally motionless an inch above the reef without aids (your stick) or using your hands to skull will remind you of how awesome diving can be!