Every diver will remember this on at least one of their dives: a small burrow in the sand, a shrimp busy shovelling out all of the sediment and a tiny fish guarding the entrance to their little Batcave. These little bodyguards are called gobies.

With this statement however I do highlight the more well-known part of the Goby family. There are many different types like Coral Gobies, Dart Gobies and Partner Gobies. Only about 100 of the over 2000 known species are working together with burrowing snapping shrimps. These 100 species are called the Partner Gobies and their special relationship with the shrimps is what intrigues me. 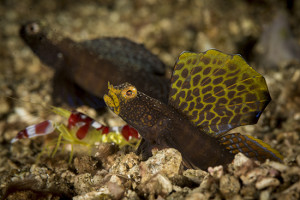 This symbioses works well for both the shrimps and the gobies. It is still unsure why these two species have evolved into being dependent on each other. Theories state that gobies are unable to make their own burrows and need the shrimps to dig the holes for them. In return the gobies turn into their personal bodyguards and hover just above the entrance to the elaborate tunnel system to warn the shrimp when a predator is getting a little too close. When trouble is near, the goby warns the shrimp with a so-called ‘tail flick signal’. The shrimp quickly protects itself in the burrow and makes some room for the goby to join him.

The shrimp has a long antenna that keeps in contact with the goby, especially when he’s out shovelling his front yard. All that we as divers see is the nicely landscaped garden entrance of the burrow but there is actually an entire tunnel system that can cover an area of about one square metre to about 50cm to 100cm deep.

Because this would take one tiny shrimp quite a while to dig by itself, usually they work in pairs. Most burrows are inhabited by two shrimp, a male and a female. The only way to distinguish that for us as divers would be to check which of the two claws is larger in size. This will be a different claw for both of the shrimp.

Since the shrimp are born to dig, the tunnel system is ever expanding and therefor even the entrance moves over time. It doesn’t look like much, but every day the entrance shifts a few decimetres!

Alright guys, this was my impressive goby knowledge. Is there anyone else with more amazing facts about gobies?