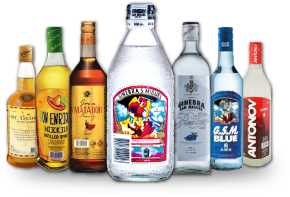 One of the more worrying things is it is possible (and often encouraged) to turn some of these delights into a refreshing afternoon cocktail – maybe not the most accurate description – but let’s review your choices.

Note:Ingredients, quantities, names and anything else WILL vary randomly between regions.

‘Mistisa’
None of our local staff can tell me how to spell this or what it translates to – but may have a Spanish origin.

Weng Weng
Weng-weng is Filipino slang for the person who has had a few too many – it is no surprise how this one got its name then. Not to be confused with ‘Wang-Wang.’!

This one is actually popular and drunk in bars by Manila’s socialites.
Rum
Gin
Vodka
Tequila
Brandy
Scotch
Mixed with orange and pineapple juice and grenadine.

Ingredients:
1x Red Horse (Pegasus part)
1x Gin (………has an angel on the bottle – Flying part)
Mix in any random quantity in one of the hooch bottles. Pour into one glass and pass around the crowds of people you are drinking with.

Island Punch – probably named as it feels like you have been beaten up the following morning.

Ingredients:
Random quantities of Red Horse, Local Rum, and Coke mixed together in a giant bucket. Avoid adding fruits, ice or other mixers – no diluting here. One glass dunked in the bucket and pass around the crowds of people you are drinking with.

A quick word about the whole sharing of a single glass drinking method Filipinos love to employ. First off, it’s definitely not an entirely germless process, but it is a sociable one. At any given point, there is only one person drinking as there is only one glass between the whole group. You would think this would slow down the drinking process, but actually it has the opposite effect.  Once you pass the glass on it can be a long time before it comes your way again, for this reason, the person drinking is constantly reminded to “drink up” so someone else can have the glass. If there is a person that is particularly slow to get to the bottom of their drink, a common question will be “are you growing a plant in that glass?”

So there you have it, a few of the local delicacies of the Philippine booze cabinet. I wish I could recommend my favourite, however I think steering clear of this lot may be my best course of action. I’ll be at the bar with a San Miguel if you need me